Starting with Daily Build #2520, the Corona Labs engineering team made some significant updates to the two native text entry API functions, native.newTextField() and native.newTextBox(). Some of these are breaking changes, meaning that they will cause your apps to behave differently.

Before we talk about these changes, let’s discuss why they were implemented. Essentially, the native API features live outside of the Corona SDK OpenGL display hierarchy. If you define your content area as 320×480, create a display.newText() object with a 20 point font, and run the app on an iPhone 5S (640×1136), Corona SDK will automatically make that a 40 pixel text object. In this same case, if the text inside a native input field is also 20 points, the operating system will scale the font from 20 points to 40 points so that it fits. However, if your content area isn’t pixel perfect — say 320 points on what should be a 360 point iPad — or if you’re trying to adapt it to Android’s 160-ppi setup, the scaling may not end up matching. In addition, on iOS, OS X, and Android, the amount of “chrome” (decoration/border around the input area) varies, thus compounding the overall issue.

With this in mind, let’s explore the changes and how they impact these two API calls.

This is a breaking change. Now, when using native.newTextField() or native.newTextBox(), the specified font size will match the size of a display.newText() object that uses the same font size (previously this was based on the device’s native point size).

Because this is a breaking change, and you may have implemented a workaround for font scaling, we’ve provided two new “legacy” setting options via display.setDefault(). Note that there is a distinct option for native text input fields and boxes:

In a previous tutorial, we introduced a couple functions to help size your text input fields and the text within them. One of the sample functions allowed you to specify the desired height of the field and have the font fit the field. This is now the default behavior for native.newTextField().

However, if you’ve already implemented a workaround, you can change this behavior as well. You can either have the font resize to fit the field or the field resize to contain the font. This is achieved via two new functions:

The first of these functions (object:resizeFontToFitHeight()) is useful if you change the input field’s height sometime after the field is created, and you want to resize the font to fit within the field. For example:

The second function (object:resizeHeightToFitFont()) is useful when the font size is the higher priority, and the field can be a variable size to accommodate the font size.

IMPORTANT: If you choose to use these new scaling methods, you should not use the functions presented in the previous tutorial.

Better use of chrome on Android

On Android, the “chrome” around the text field comes from a 9-slice image sheet (in Corona terms). This contains some extra transparency which causes the box to be smaller than it needs to be. Now, we look through the pixels to scale the text field so that it better matches what you see in the Corona Simulator and on iOS devices. This should make building multi-platform apps easier. 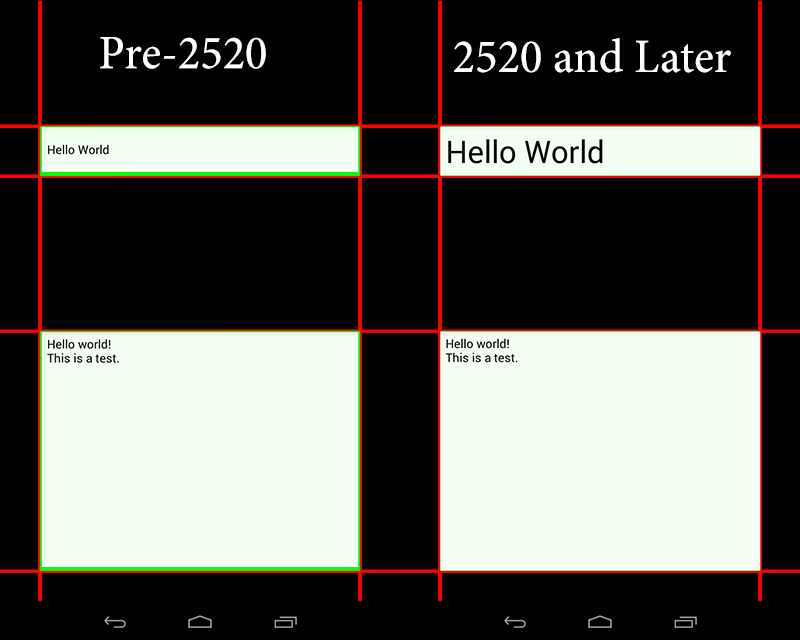 In the diagram above, the green area represents the extra transparency that was making the fields a bit smaller than they should have been. Because of this change, your existing text fields will become slightly larger when  you rebuild your app using Daily Build #2520 or later.

Two other features/fixes related to fonts were also implemented as of Daily Build #2520: